Verfasst am 11. Mai 2016. Veröffentlicht in Beiträge 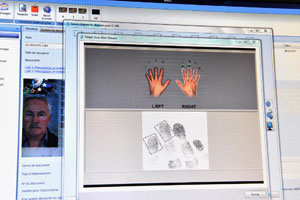 Last week, the European Commission published its proposal to recast the EURODAC Regulation, which includes plans for longer storage periods, an expansion of data categories and comparison capabilities, and mandatory fingerprinting and photographing. To date, EURODAC has been used for comparison of fingerprints.

Now the system is also to store facial images and facial recognition capabilities are to be added. There are two different search options. When checks are taking place, people’s images can be compared with available personal data to verify their identity (known as 1:1 matching). However, it is also possible to search for a face in the entire database (1:n).

EURODAC was set up in Luxembourg 16 years ago as a central system for the border police, and began operating in 2003. Its original aim was to compare asylum requests, to prevent multiple applications being made in different countries. The database is now managed by the European Agency for the Operational Management of Large-Scale IT Systems. Information is stored on asylum seekers and foreign nationals who are apprehended while irregularly entering the EU at the external borders. Optionally, the EU Member States can also process the data of migrants without residence status who are apprehended within the Schengen area.

Germany accounts for one third of transmissions and comparisons

Countries are required to take all ten fingerprints. As of 1 April 2016, around 4.5 million sets of fingerprints in total are stored in EURODAC, according to the Federal Ministry of the Interior. Last year, the Member States’ authorities carried out more than two million transmissions and comparisons, with Germany accounting for around one third.

The recast of the EURODAC Regulation in 2013 expanded access to the database from its original border policing purposes to include law enforcement purposes. This option is being used more and more frequently; in 2015, German police forces carried out just eleven fingerprint searches, compared to 31 already so far this year. The Central System takes around one minute to respond to searches by the Member States’ authorities.

Under the Commission’s proposal, taking facial images will now become mandatory. Together with the fingerprints, the images will be stored in the EURODAC Central System. This would apply to all three categories of foreign nationals who have irregularly entered the EU, including people apprehended within the Member States’ territories. If the people concerned refuse to allow biometric data to be taken, this can be carried out against their will – even in the case of minors. The Commission’s proposal states that taking facial images is especially helpful in the case of unaccompanied children.

Storing facial images would be ineffective without corresponding capabilities for comparing them. While the taking of these images is to begin immediately after the new Regulation enters into force, technologies for processing them are not to be introduced until a later date. The Commission intends to carry out a feasibility study into the introduction of the necessary facial recognition software by 2020 at the latest. The costs of updating the entire system are put at around thirty million euros.

“Pre-cursor” of the introduction of facial recognition in other databases

The new Regulation will make EURODAC the “pre-cursor” of the introduction of facial recognition in other EU databases as well. The European Union is planning, for example, the introduction of an Entry/Exit System registering the entries and exits of all third-country nationals, which will also include fingerprints and facial images. The systems could be brought together in a single platform with other biometric databases (such as the Visa Information System, the Schengen Information System and the European Criminal Records Information System). One proposal calls for the establishment of a biometrics-based “core system”.

The European Union’s biometric systems are not only being expanded at a technical level, however. Under the proposed Regulation, the border management agency FRONTEX would be given read and write access to EURODAC data. The EUROPOL law enforcement agency in The Hague would also be allowed to search the information. The agency has been developing capabilities for processing facial images for some time, drawing on the experience of the Bundeskriminalamt (BKA). The backdrop to this is, according to the agency, a “strong increase in the volume of data”, which is now all but impossible to process without automation.

For facial recognition, the BKA uses software it purchased in 2007, “FaceVACS-DBScan”, produced by Cognitec. This allows photos of people to be compared with photos in the national INPOL police information system. The software is also available to the Federal Police and the Land Criminal Police Offices via a common interface.

Use of this facial recognition system has risen significantly in recent years. The BKA is working to improve the system through research projects.